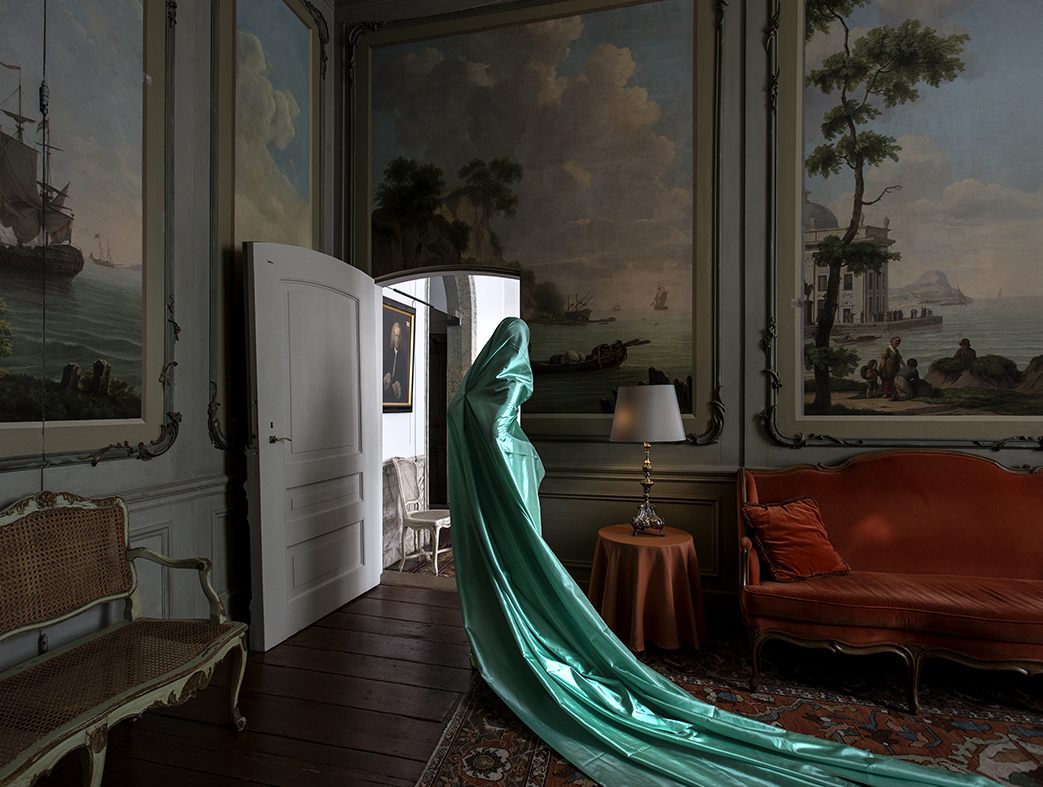 Philippa Van Loon: “It has been a very interesting experience to have Güler Ates work in the museum, taking photographs with her model in natural light while the visitors wandered through the house. Sometimes you forgot that she was not part of the setting and history of the house. I couldn’t stop thinking of what my father would have thought, he was an Archeologist of the Middle East, spoke Turkish and often worked on expeditions there. He would have been amused to see the cross reference to the most ancient of cultures from which we all stem.”

Güler Ates works with Video, Photography, Printmaking and Performance. At the heart of her work lies an exploration into the experience of cultural displacement. Manifestations of her work are realized through performance and site-responsive activities that merge Eastern and Western sensibilities.

The title refers to unknown identities in her character that is the central theme in her work. Who is this person? What stories is she unfolding? What commentary does she make with her gestures and body language at Museum Van Loon? And where is her place in the art and architectural histories of the West and the East?

The Veil is a garment or fabric as much as a concept that becomes theatrical in Ates’ work. Sometimes it becomes a form, a metaphor, a mystery, invisible, silence or holiness. It is a language that she employs in her work that also becomes poetic, revealing and concealing the body. The history of the veil goes back as far as to Mesopotamia, where it is believed the practice of veiling started in the higher ranks of society. Drapery has been a very important theme in art history from the ancient Greeks to contemporary art in the 21st century. Drapery embodies the concept of representation or absence of the body.

Looking at Thora Van Loon’s and Louise Borski’s sensual, soft and gentle paintings in the blue drawing room at Museum van Loon, one inevitably thinks about the themes of drapery and of the presence of the body. These women have shown us their power and presence with their body language and gestures from these grand paintings. They gaze at the viewer in a veiled, almost mystical manner from a distance. There is a huge contrast between the figures in these paintings and the figure that is the central theme in Güler Ates’ work in terms of presence and absence of the body, but yet shares a similar history of drapery or garment.

Displaying her work in the blue room not only questions the role women played in history but also comments on Thora Van Loon’s important role as a representative lady for the court in Amsterdam.

During the exhibition Ates would like to open up women’s role in the current political turbulence in the Middle East (and particularly in Turkey) and the West by looking at the history of women from different social ranks. When such turbulences happen in war areas, important struggles such as women’s rights and education get neglected. During the making of the work in Museum Van Loon, Güler Ates reflected on how the East and West exist side by side, their differences defining each other and how the Museum demonstrates some of this reciprocal definition, such as from the involvement of the Van Loon family’s business with the Dutch East India Company in 1602.

Güler Ates sourced the fabric for implementing her new works at Museum Van Loon locally therefore re-examing the definition of ‘exoticism’ in trading the fabrics. Most colors of the garment that her character wears in the photographs were carefully selected from displayed flowers that were at Museum Van Loon during the implementation of the project. The objects, paintings and figures on the displayed panels along with the flowers are embedded as a layer in her work and with doing so embed an intuitive emotional commentary.