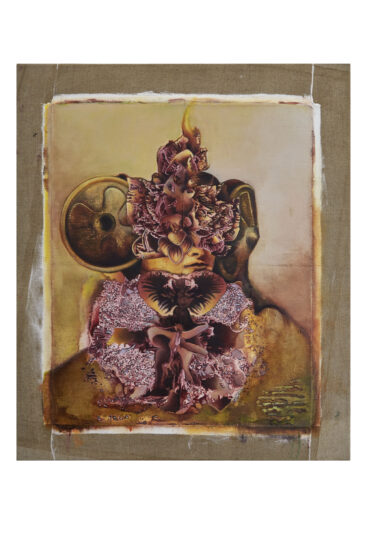 Michelle McKeown’s artistic research engages intensively with critical posthuman thought and proposes a correspondence between figurations of feminist, nomadic subjectivity and contemporary painting as an expanded practice. Her recent studio inquiry  attends to the condition of painting as a situated and embodied knowledge practice. The female painter within this framework  is apprehended as an enfleshed and networked subject,  materially rooted in, and accountable for the specific location and time  in which she is embedded. As the feminist philosopher, Rosi Braidotti  explains, a feminist nomadic art is not only bound to ‘ certain territorial or geopolitical coordinates but also points out one’s sense of genealogy or historical memory.’ [1]   McKeown’s most recent body of work purposively endorses Braidotti’s nomadic approach by taking as their stimulus representations of the feminine as it is encoded in Irish visual culture. Deploying techniques of pliage (folding) and decalcomania (transfer) in her painting process, McKeown seeks to disrupt the masculine gaze and will to mastery.  Folding submits the painting to itself and by ‘staging the ritual of its own destruction’[2] consumes phallocentric representation from within.   Radical surrender yields to an ontological openness that liberates woman’s imago from the cultural and political ideologies which have traditionally sought to arrogate it.

‘It’s a kind of civil war that each painting is waging on itself. This opens up a passage to what I could call Michelle McKeown’s psycho-political works . . . If we look at it long enough we begin to recognise our obsession with order, division, government.  But this obsession appears here as a sickly condition, a skin disease that hovers between attraction and repulsion.  So one approaches power only to realise that one is repulsed by it, a repulsion that neve the less does not mark the end of one’s attraction.  . .it’s this double movement of a settling and unsettling that McKeown’s paintings capture, the translation that they mark.’