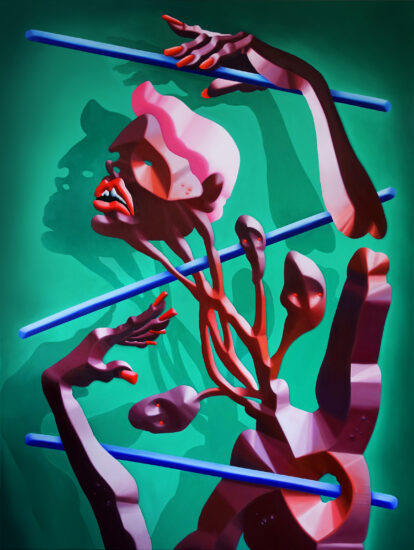 As visual narrator, Hoffmann (Hamburg) looks at our society with the inherent human mortal existence of every individual. IS EVERYTHING A MYTH? This ambivalence generates her artistic tension, which is reflected in the aesthetics of the interplay of certain surfaces and becomes the mirror of our humanity. Smooth and polished with artificial 3D feel, which organically unites into strange bodies. For this she uses image processing programs and misuses those same effects until the pixels evolve into creatures. The artificiality is elevated to the form of life. In keeping with the prevailing cultural zeitgeist, which is characterized by the affinity for a copy, it finally reproduces its digital creation by immortalizing on canvas in the same way.

As the human printer, Hoffmann competes with the machine and demonstrates on closer scrutiny that she has failed. Those color-saturated digital compositions that glow of illuminated screens, now move to the surfaces of non-sterile canvases with dirt and brush hairs. In fragments of its residual reality, it thrives an even more human and comforting parallel dimension.