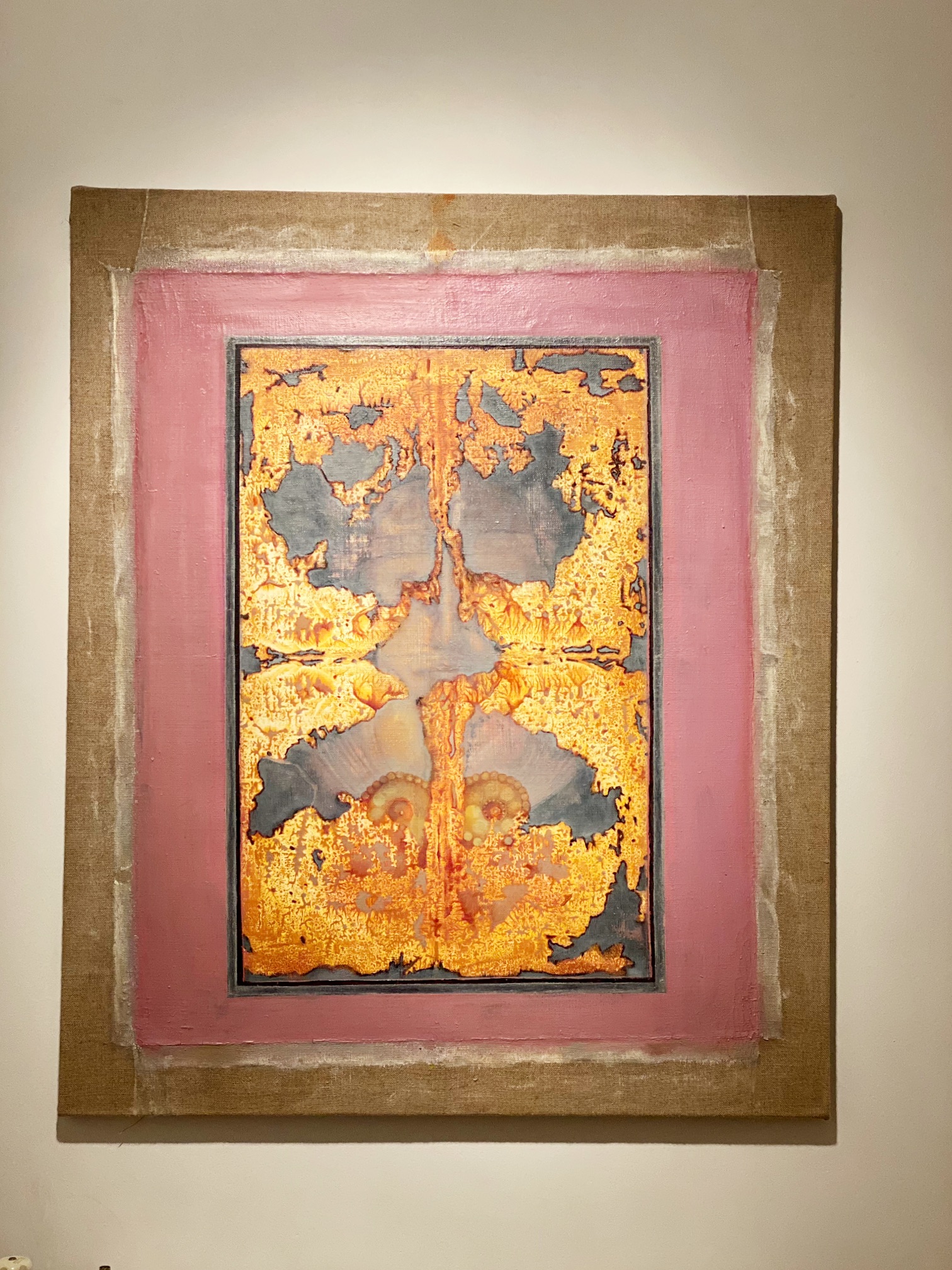 ‘Only inside the whirlwind will the clue to the new rhythm be found.’ [1]

‘The Widening Gyre’ presents Irish artist Michelle McKeown’s most recent exploration of the  portrait as agent of masculine power and vestige of sovereign, national identity.

A gyre is a spiralling movement; a vortex; a revolutionary turn. In Oceanology it denotes the circular motion of major ocean current systems. It is also a prominent motif within Irish prehistoric culture; spiral petroglyphs proliferate in many archaeological sites throughout the ancient Celtic world.  In the context of W.B Yeats poem ‘The Second Coming’(1920), – the opening lines from which this exhibition draws its title[2]  – the gyre refers to a vast cycle in history which Yeats foresaw coming to a close at the end of WW1.  Yeats despairs at this historical shift, describing it in apocalyptic terms as a descent into cruelty and chaos.

In one sense, it could be posited that McKeown’s paintings affirm Yeats’ vision of the shifting gyre, however, her work resists the conceptualisation of this transition as a cataclysmic fall, within the ‘whirlwind’ of chaos, rather, the liberating potential of a ‘feminine’ desire and a source for a critical  posthuman mode of becoming.

Italian philosopher and activist, Franco ‘Bifo’ Berardi observes in his book ‘The Second Coming’, 2019, which also derives its title from Yeats’ 1920 poem; ‘Since Machiavelli declared that political power (the Prince) is based on the violent submission of the capricious feminine side of reality, (whose Latin name is Fortuna), modern history has been above all a permanent manly war against femininity.’[3] McKeown’s most recent body of work places the ‘feminine’ forces of Fortuna (chance, hazard, touché) at the front and centre of her artistic practice and research.

On the occasion of this exhibition, the launch of which marks the centenary of the publication of Yeats’ poem, McKeown takes as her point of departure, images of ‘Woman’ as she is encoded historically in Irish visual culture.  Many of the paintings draw inspiration from iconic stamps produced during the 1940s to promote the ‘Irish Hospital Sweepstakes’, a lottery founded as a means to finance the newly independent state’s national hospitals. The ‘Sweepstake’ portraits depict young women in Celtic costume, modelling goddesses and prominent female figures from early Irish mythology. Deploying painting techniques most readily associated with surrealist automatism, such as pliage (folding) and decalcomania (transfer), McKeown entrusts capricious forces of chance with a pivotal role in the work’s formation by applying the rorshach technique.

Through the ritual act of folding the image, a gesture that is at once auto-mutilating as well as auto-affecting, McKeown stages a formal insurrection against the icon’s representative function. Folding the painting enacts a radical surrender of the artists individual will and authorial intent, foregrounding instead the agential potentiality of paint-matter itself and its proclivity for self-organisation. Through the painting process the objectified female sitters are rendered abject; reconfigured into totems of chance; harbingers of a posthuman becoming where masculine power and consciousness is no longer master. Some of the ‘sweepstake’ portraits remerge as dehiscent entities, as though bursting open into space, others appear as though devoured by the milieu in which they are embedded.  Implicated in this relation a new is the viewer who like the sitter is also liberated from any master code or authoritarian symbolic.

Berardi proposes that if we are to re-emerge from the wreckage of humanism intact we must learn to embrace the forces of Fortuna, ‘resizing the human will, in comparison with the untameable forces of nature and the unconscious’[4]. In essence we must make friends with chaos. Through her approach to painting McKeown voyages into ‘the widening gyre’, with hope and equanimity, searching for clues in the whirlwind, seeking companionship with chaos.

Michelle McKeown’s artistic research engages intensively with critical posthuman thought and proposes a correspondence between figurations of feminist, nomadic subjectivity and contemporary painting as an expanded practice. Her recent studio inquiry  attends to the condition of painting as a situated and embodied knowledge practice. The female painter within this framework  is apprehended as an enfleshed and networked subject,  materially rooted in, and accountable for the specific location and time  in which she is embedded. As the feminist philosopher, Rosi Braidotti  explains, a feminist nomadic art is not only bound to ‘ certain territorial or geopolitical coordinates but also points out one’s sense of genealogy or historical memory.’ [1]   McKeown’s most recent body of work purposively endorses Braidotti’s nomadic approach by taking as their stimulus representations of the feminine as it is encoded in Irish visual culture. Deploying techniques of pliage (folding) and decalcomania (transfer) in her painting process, McKeown seeks to disrupt the masculine gaze and will to mastery.  Folding submits the painting to itself and by ‘staging the ritual of its own destruction’[2] consumes phallocentric representation from within.   Radical surrender yields to an ontological openness that liberates woman’s imago from the cultural and political ideologies which have traditionally sought to arrogate it.

‘It’s a kind of civil war that each painting is waging on itself. This opens up a passage to what I could call Michelle McKeown’s psycho-political works . . . If we look at it long enough we begin to recognise our obsession with order, division, government.  But this obsession appears here as a sickly condition, a skin disease that hovers between attraction and repulsion.  So one approaches power only to realise that one is repulsed by it, a repulsion that neve the less does not mark the end of one’s attraction.  . .it’s this double movement of a settling and unsettling that McKeown’s paintings capture, the translation that they mark.’