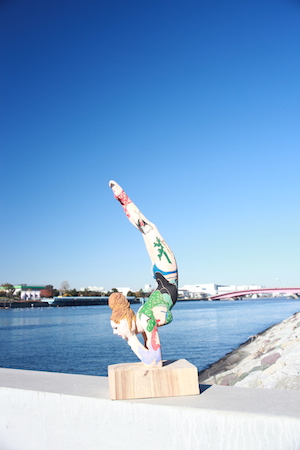 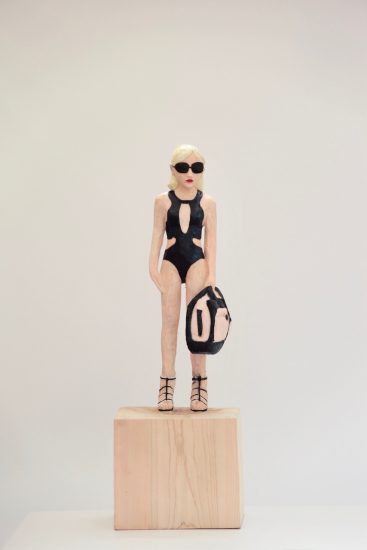 “Hideki Iinuma’s work is spiritual. There is an intimate or intense dialogue with the tree spirit hidden in the wooden material and the chisel.

The magical vitality emerges in the shape of the human body”

Hideki Iinuma (B. Nagano, 1975) belongs to the young generation of Japanese artists who critically analyze the current changes through his sculptures. The girl-image evolved from Neo-Pop forms his main inspiration, as does the changing perception of women in Japanese society. His figures carved from Camphor wood, often exuding a hint of ostentatious sexuality, mostly represent models from Pintarest and Instagram. For women in Japan as for those in Europe these young women are becoming more and more ‘muses’, fashion icons.

With his figures sculpted from wood, Iinuma finds himself in a borderland between Western and Eastern culture marked both by contrasts and similarities. After completing his study at Graduate School of Aichi Prefectural University of Fine Arts and Music in 1998, Iinuma entered Ecole Regionale des Beaux-Arts, Nantes (France). He took part in student exchange program (ERASMUS), which led him to study in Copenhagen (Denmark), Milan (Italy) and Karlsruhe (Germany). Iinuma uses the old ichiboku-zukuri technique common in Japan until the 10th century. He combines this technique with a special surface treatment that leaves the traces of the grain still visible under a coat of paint.

Hideki Iinuma, who is strongly drawn to Georg Baselitz, is often compared to Stephan Balkenhol (b. 1957). Iinuma’s sculptures share the secular, contemporary subject matter, the dominance of the plinth and the visibility of the tool marks in common. But the differences are greater: while Balkenhol figures have a raw, coarse surface structure, Iinuma’s sculptures are worked in a finer, more homogeneous way. The emotional emptiness and stereotypical impersonality of expression that distinguish Balkenhol, make way in Iinuma to a more individual characterisation. Looking at them directly, behind the façade of their made-up faces, personalities marked by individual life stories can be discerned. The posing models and the exposed nudes seem to be taking pains over their attitude and expressionlessness, endeavouring to construct a protective façade. Hideki Iinuma unmasks the contemporary ideal of beauty as a depersonalised surface for projecting exaggerated desires and excessive consumerism. By releasing the female figures from their context, characterised by fast living and superficiality, reproducing them in wood, a natural, archaic material, and giving a glimpse of their personality, he endows them with new dignity and individuality.