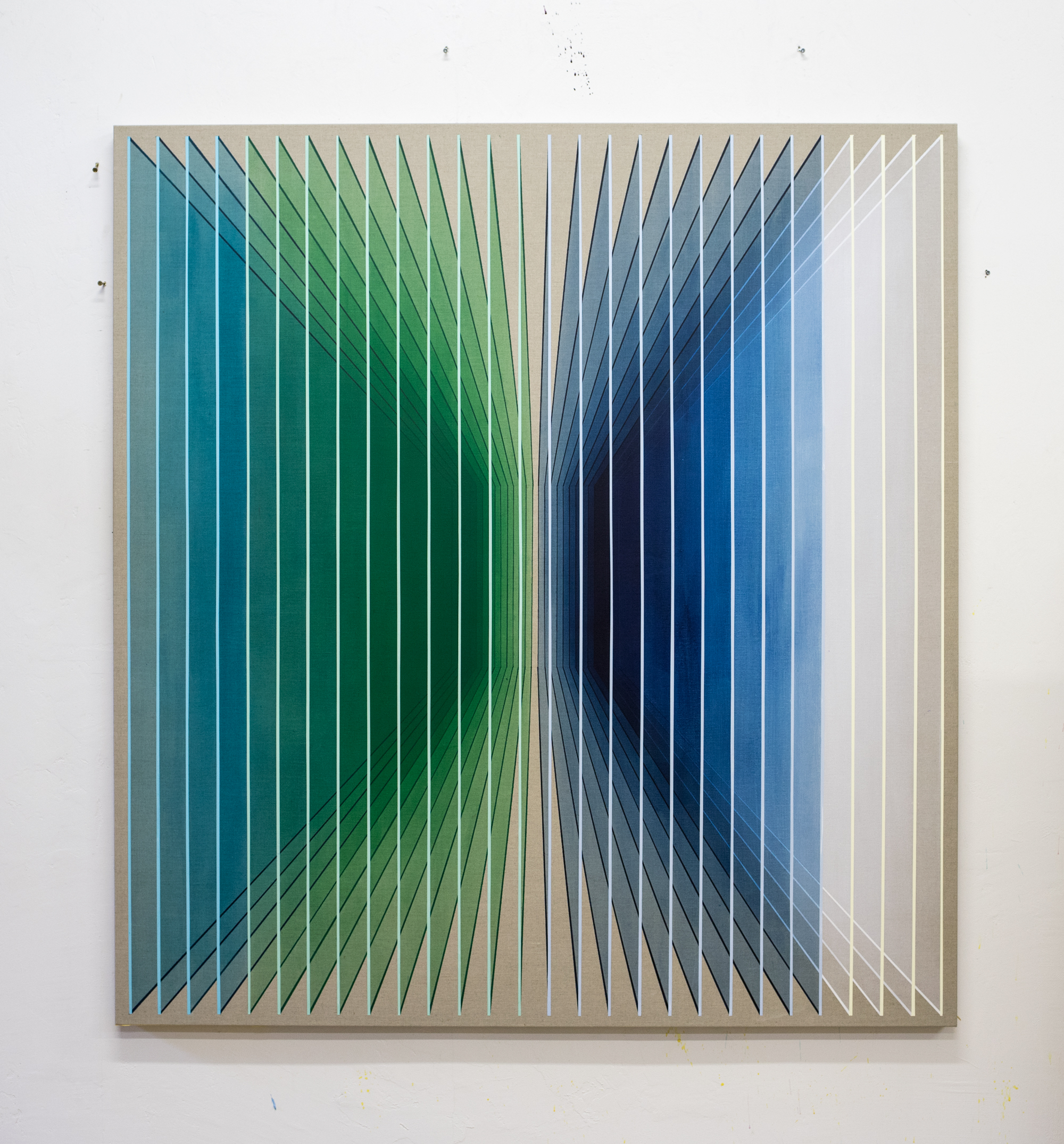 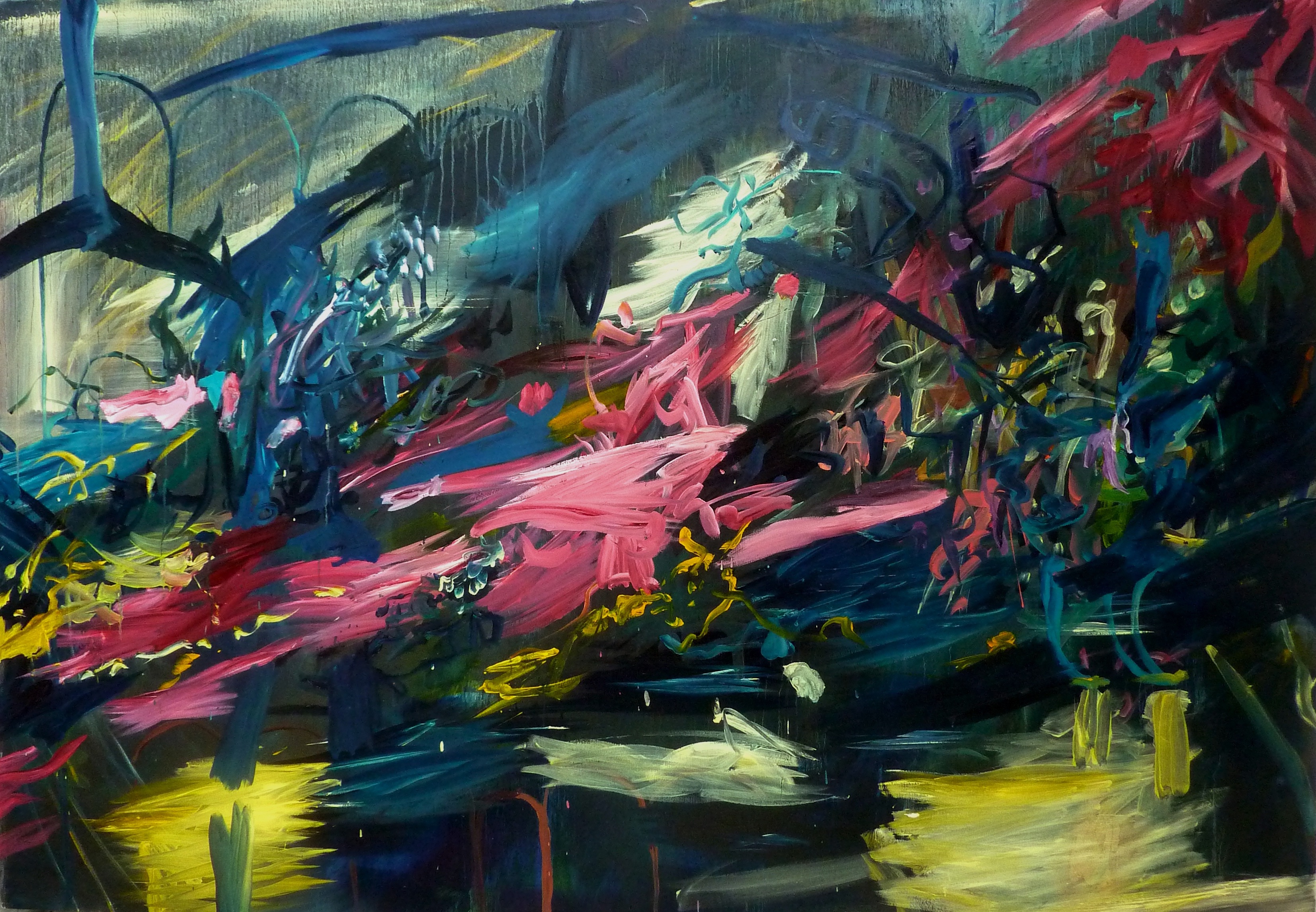 In this body of work Annabel Emson (London, 1975) plays with painting as a way of exploring notions of childhood, body and trauma through the lens of reality and observation, both present and past.

She refers to painting not as inanimate object but as an animated part of herself, an extension of an ‘other’ into a kind of ‘eigenstate’. The created object becomes the silent observer of what it was created from, bearing witness to inner experience. Not the single sensory experience of a scene, a sound, a touch, a smell, a feeling but the amalgamation of the experience seen through the eyes of memory.

The observed becomes the witness looking back at the artist, mirroring the experience. A painted presence created to see itself being seen. Touching on the idea of do we really exist if no one sees us. The artist being witnessed by their own painting, as in ’Through me’; a mixture of sensation memory and feeling made physically present, made real through paint.

The concept of transformation is central to the work and the question of ‘does something behave differently if it is observed?’, plays into the notion that the artist can be transformed by being looked back at by their own paintings. Emson is inspired by how this concept plays out in quantum physics under Heisenberg’s uncertainty principle.

Through parenthood the artist has become increasingly interested in childhood and the body, trauma and memory and the fundamental process of being witnessed and mirrored. In painting she plays with the notions of who is the witness, her or the paintings, and what is it to exist only in the eyes of another (as in infancy) and how that develops into a kind of own state ‘eigenstate’ with maturity. And what happens if that development is ruptured through trauma, how does that interfere with traditional notions of time and space. Picasso’s notion that ‘everyone is an artist’ links to this idea that we are all born with our own ability to create our own witnesses to our experience.

Annabel Emson currently lives in London, she completed her BA at Chelsea College of Art and her MA at The Slade School of Art. She studied directly under Peter Doig, Chris Ofili and Bruce Mclean.

Her work is currently held in a number of public and private international collections and museums including the Saatchi Collection, Burger Collection, Sachs Collection, Gmurzynska collection, Schwarzenbach collection and de Fundatie Zwolle.

In ‘Democracy Begins Between Two’ (2000), Luce Irigaray (Belgium) invites us to rethink democracy and construct a new civil code invested with the genio femminile (the female spirit).

‘Until the relationship between man and woman has changed, the desire to dominate nature, not only cosmos and women’s nature but equally the nature of young people, of other races, and citizens of their countries, will remain unchanged.’(2000, Irigaray)

McKeown’s most recent rorschach works for Femocracy – The Divine Feminine seek to establish painting emphatically as an inter-subjective encounter, rupturing traditional representations of women in an attempt to forge new relations with man, woman, nature, world and other.

Güler Ates’ work comments on the Western notion of Orientalism and the effects of the cross-pollination of cultures on female identity and architecture. In her work she questions the relationship between the veil and the West, by setting the female veiled figure within a lush or historic European interior. Ates will be presenting new work made recently at Oude Kerk Amsterdam.

In the past years Lise Haller Baggesen has been working mainly on two bodies of work regarding Female Genius and Feminist Utopias, namely MOTHERNISM and HATORADE RETROGRADE.

MOTHERNISM (2013-) is a book and nomadic audio installation, aiming to stake out the “mother-shaped hole” in contemporary art discourse, at the intersection of Feminism, Sci-Fi and Disco. If the proverbial Mother is perhaps perceived as a persona non grata in the art world, because her nurturing nature is at odds with the hyperbolic ideal of the singular artistic genius, MOTHERNISM amplifies her presence, channeling her energy, complexity, and sublime creative potential in a series of intimate and critical reflections. The resulting collection of letters dedicated with love from one mother to her dear daughter, sister, mother, and reader—fuse biography, music, art, and history into an auto-theoretical testimony that recalls and redefines the future imperfect.

Since it’s inception MOTHERNISM has toured North America and Europe and also served as the “mother-ship” for the academic colloquium “Mapping the Maternal: Art, Ethics, and the Anthropocene” at the University of Alberta, earlier this year.

The book was co-published by Green Lantern Press & Poor Farm Press in 2014, and is available through SPD books:

HATORADE RETROGRADE (2016-) debuted at Chicago’s Threewalls/Rational Park in May 2016 and was received with an Art Forum Critics pick by Matt Morris. It features a selection of sartorial works set against a backdrop of revisionist “lipstick formalist” paintings to present a dystopian vision of the US anno 2033. In this glimmering post-capitalist burnout we must learn to make-do-and-mend, to repurpose art for art’s sake, and perhaps to forgive –but not forget– certain moments in the past when we were all hitting the Hatorade a little too hard. HATORADE RETROGRADE paints a bleak but hilarious picture of our shared predicament: on the intersectional battlefield we traverse there is no one-size-fits-all body armor, yet we cannot let our guards down post-feminism, until we arrive at post-gynophobia.

Finding something beyond politics, beyond opinion, beyond separation and judgement, a place where all is, and all is well is what excites Emson about painting. Matter just forming and transforming. This pure state is the ecstasy of the artist.

Victoria Adam has created new work for Amsterdam Art Weekend beyond politics beyond opinion. Adam makes sculptures intended to be experienced close-up and will present 3 small sculptures infused with herbal blends of both a real and cognitive variety. Each evokes a specific feeling from a combination of ingredients, smells and tactile familiarity. 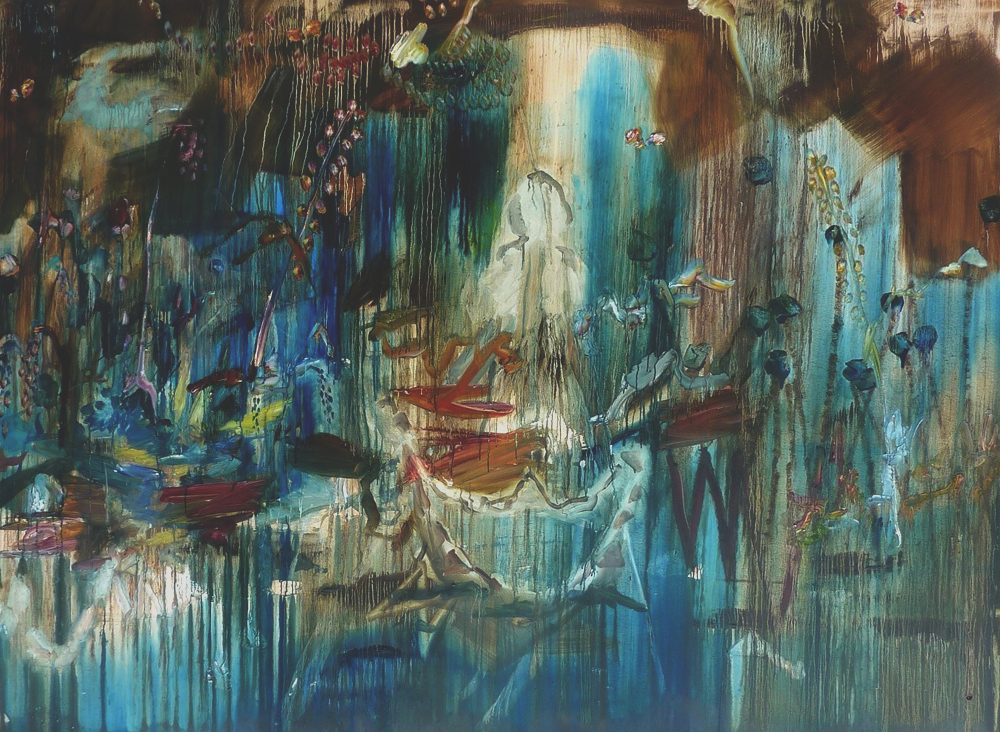 Marian Cramer is pleased to present the third solo show with new works by the British London based artist Annabel Emson.

This selection of paintings is inspired by the idea of light in history. Some of the works are tonal renditions of old master paintings selected for their specific qualities of light. They include works by Turner, Rubens and Constable. Other paintings were taken from memories of different types of light, for example Daylight or Orange Night in the Reeds. In this series of works Emson found that removing colour from paintings and limiting the palette to black and white helped emphasize the tonal qualities of light in her work.

Later different types of light were brought back into the work: peachy light and blue light as can be seen in the large paintings such as in Visiting the Spirit of Barnaby Jones. Although inspired by paintings from the past, each piece became its own and often developed individual imagery based on the present and her response to the painting during the process of making. This can be seen for example in the large charcoal landscape piece, Landscape Smoking.

The scale of the various works is based on the artist’s response to the process of making and owning. Looking at so many beautiful old master works Annabel Emson became aware of the desire to possess these pieces, to keep them, or parts of them that inspired her. The miniature paintings began from this desire to be able to carry a work of art in one’s bag or pocket, to keep it with you wherever you go. Emson chose the size and shape as they were similar to the postcards that one would buy of the old paintings that carried the sense of light she was trying to capture.
The large paintings became similarly interesting in that their scale enabled Emson to be in them while making them, surrounded visually by their experience. 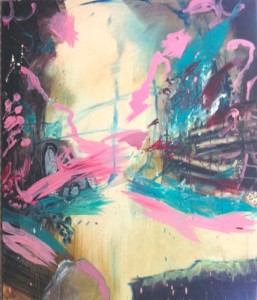 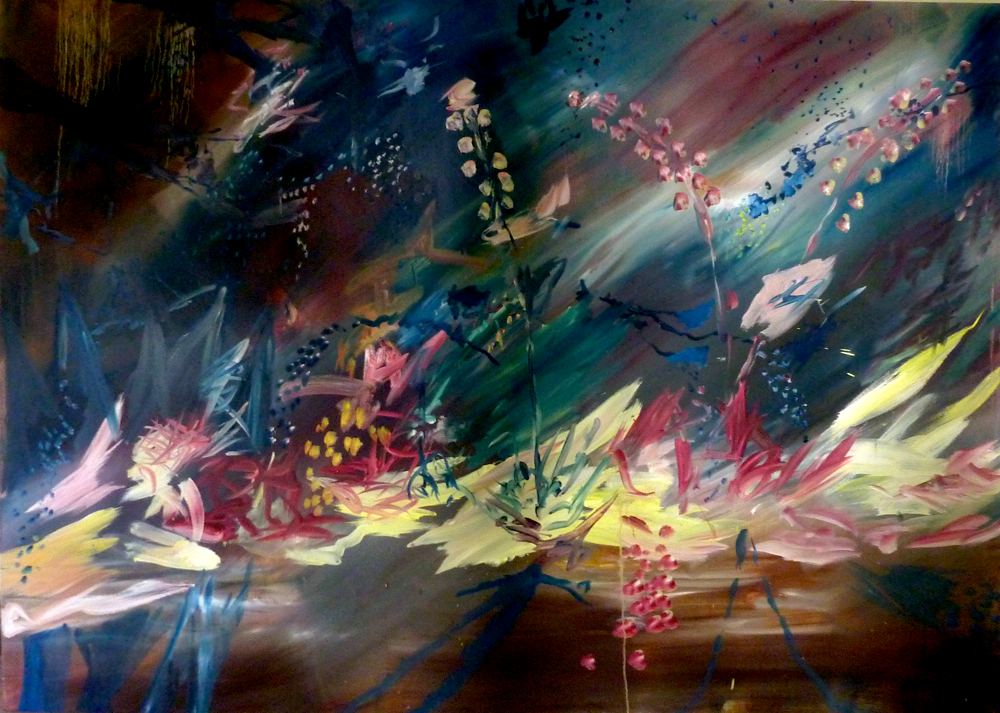 Paintings and works on paper

MARIAN CRAMER PROJECTS is proud to present an exhibition of new works by the British London based artist Annabel Emson. This is the artist’s first solo exhibition in the Netherlands.

Annabel Emson (b.1975, London, United Kingdom) received an MFA from The Slade School of Art in London and a BA from Cheslea College of Art & Design. Charles Saatchi recently acquired a series of her paintings and Emson’s work will be shown in the Upcoming Paint exhibition at the Saatchi Gallery in London. Emson lives and works in London.

Emson’s paintings are experimential performances on the relationship between the inner psychological terrain and the outside materialist world; through mark making and the language of paint she creates doorways into autobiographical landscapes that allow her to visually inhabit both worlds. Her paintings visualize bursts of energy and movement. The work addresses fundamental thoughts on communion and belonging; creating an intimate common bond with her viewer; they are still, silent open relationships through which she is dialoguing.